Blood of Eden - Part I, Metaphor 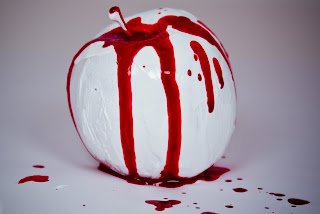 I've never believed in the literalness of the Adam and Eve story. From the time I was a child, I was raised to see the story as a metaphor, a mythology. I understood most of the Old Testament to be an oral history, inspired but not written by God. I found little difficulty in making the temple experience fit in with this mythology. And it is as a myth that I listened to the Peter Gabriel song "Blood of Eden" last week with new ears.
It strikes me as profoundly interesting that in the Garden of Eden story, it is of man that woman is made. Eve's very body is formed from Adam's rib. In real life, we have man formed of woman - from her womb, grown from her essence, the blood of the ovary and uterus.
And here is the irony: the Garden of Eden story is a study in role reversal.
As I mentally switch the roles in my mind, I see Adam as the mother-figure. I see myself as Adam. Eve is my child, flesh of my flesh, bone of my bone. It is not a story of marriage, but of birth - out of woman is made man. The blood of Eden is the blood of childbirth and of labor, the literal "rib" extracted viscerally from Adam's flesh to make Eve. Thus, woman should be called man, and man woman, because man is "made of" woman.
Galen Dara published a beautiful illustration of this interplay between man, woman, Adam, Eve, and childbirth in a recent edition of Sunstone Magazine (issue 160). In it, Galen represents the image of the apple as becoming a uterus with fetus, dripping blood. I was struck when I first read the graphic retelling in its vivid honesty. I refer the reader here to see Galen's person website, with a picture of this gorgeous comic.
It would be easy enough to say that the Garden of Eden story was manipulated by patriarchal culture, placing man in the formative "master" and woman as the child-slave that needs protection from their own poor choices. Not knowing much about biblical history, I mention this only as a possibility. An alternative possibility is that "adam" and "eve" were never meant to represent strict gender roles at all. This is particularly appealing from the perspective that most Christian religions do not see God as male OR as female, but as an entity with features of both genders. Thus what we read in the Old Testament as a story of gender roles may be a reflection of the aspects of godliness.
When the child (Eve) partakes of the fruit of temptation, and admits of her choice, it is unsurprising that Adam, as mother, would choose to remain by Eve's side. What mother would not reach out to protect an mistaken or wayward child? You have formed this very creature, and desire to love and, above all, to protect. Protect, as she will be thrown from the garden and into the "lone and dreary world". Protect my child, from being thrown from paradise, unprepared.
It is also unsurprising that God would command the child to obey the parent (Adam), as the parent obeys God, or that God would command the parent to work for her child's food and raiment. This is not a story of marriage and roles within marriage, but of the bonds of parenthood.
Bringing us back to the words of Peter Gabriel's song, why is it we say that when woman and man are wed, they become "one flesh"? If it is based on the Garden of Eden story - man is in the woman, but the woman is not in the man. Indeed, man is in the woman both figuratively (i.e., by rib) and literally (i.e., by sexual intimacy).
That the woman has no such parallel of entering man strengthens my conviction that Adam was meant to represent woman.
Image by Knawx at deviantart.com.
Posted by Madame Curie at 8:00 AM

You might check out "When God Was a Woman" by Merlin Stone. It suggests that the story of Eden was deliberately crafted to denigrate key sacred elements of goddess worship. Pretty fascinating stuff.

Thanks for the suggestion, Holly! I will definitely check it out.

thank you so much, for the nod, and for this wonderful post!

(that book holly recommended is also on my "must read that!" shelf)

I love this story: and its position at the heart of the most 'open' part of LDS teachings (the temple) strengthens my belief that it is a myth that embraces a depth of personal and poetic meaning. Spencer W. Kimball's famous statement that the detail of the rib was "of course, figurative" is a rare moment of ecclesiastical endorsement of these kinds of readings in the LDS Church.

I am so past trying to interpret this myth in a positive light. The Adam & Eve story has wreaked so much damage. Any attempts at spinning it in a more palatable manner seem... I don't know... destined to fail? Because the people who still care about this myth are the very ones who will cling to their original chauvinistic interpretations. I say let it burn.


I suspected my wife of cheating on me but I never had any proof. This went on for months, I didn't know what to do. i was so paranoid and decided to find a solution, i saw a recommendation about a (Great Matatan a powerful spell) and decided to contact him. I explained the situation about my wife to him and he said he was going to help me.I gave him all the informations he required and afterwards i received all my wife’s phones Text messages and calls, I was hurt when i saw a picture of my wife and her lover. I feel so bad about infidelity. but i am glad Great Matatan spell was able to help me get all this information, you can contact him via email ( matatanspell@yahoo.com . )guys you cant know all of this if you dont have a good spell caster like Great Matatan.

Trusted and Verified
Requests? Get in touch.
Contact Now
Brought to you by